Creative youngsters at Ramsgate Arts Primary are taking part in a project in partnership with the National Gallery.

They are using the gallery’s painting Men of the Docks by George Bellows, 1912, for inspiration for a range of artwork.

The result is the Take One Picture exhibition, where pupils have responded creatively to the painting’s themes, subject matter, historical context and composition.

The pupils’ work and exhibition in the entrance and reception area is on permanent display and Head of School Nick Budge added: “We hope there may even be an opportunity later in the year for some of our work to be in the National Gallery as part of its project work with schools around the UK. Our pupils’ creative outpourings may also be displayed closer to home in the gallery at Margate Railway Station. 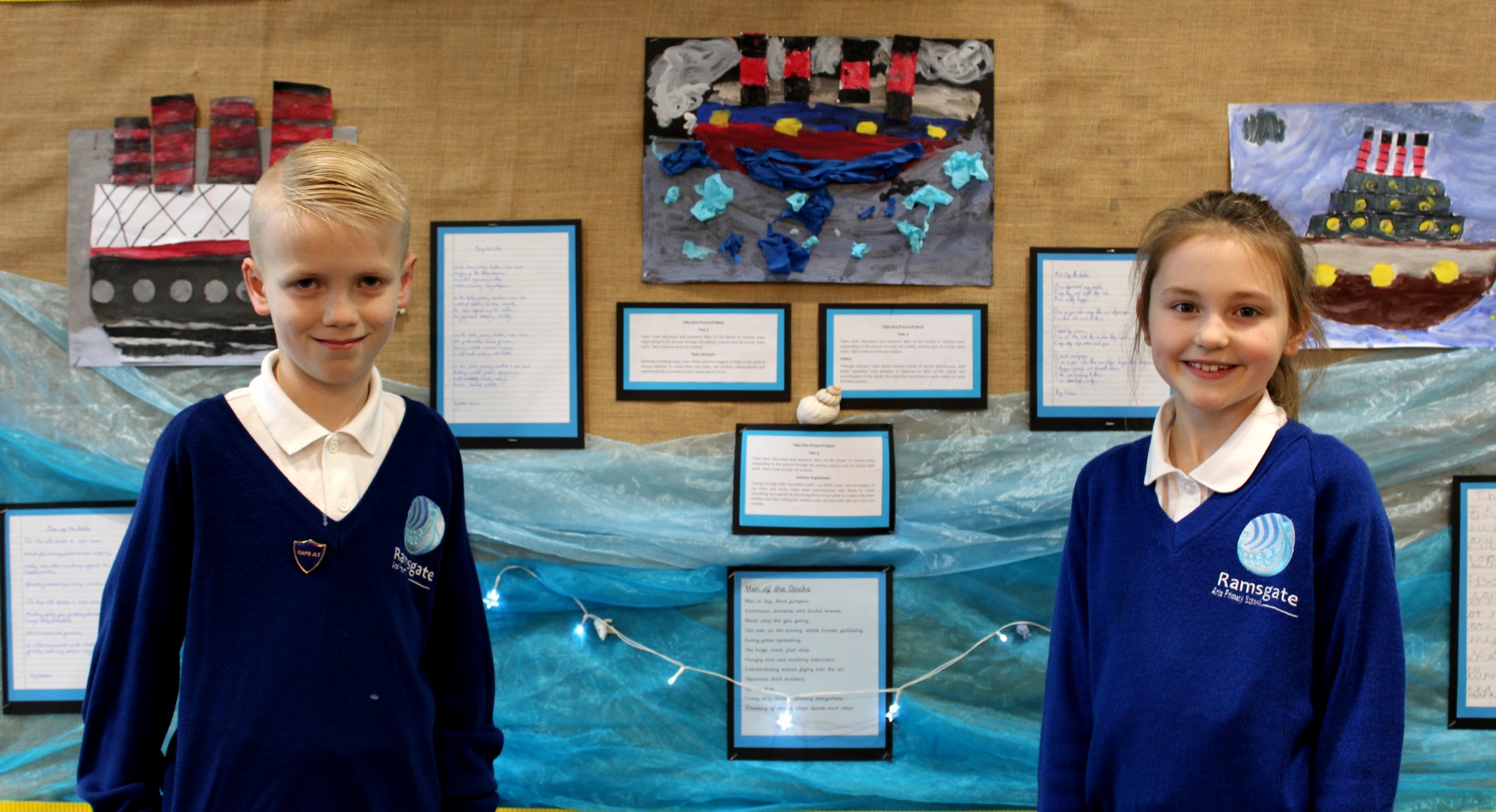 “The exhibition is a reflection of every child’s work from Reception class to Year 6 and all of our contributors and staff deserve huge congratulations for the creative way they have approached this initiative. Their efforts are thought-provoking and well realised.

“The varying displays certainly demonstrate the diverse range of creative talent and arts that we are proud to have at RAPS.”

The pupils’ work has been encouraged and overseen by Thanet artist Karen Vost and the school’s art leader, teacher Mike Brown.

Here is what the various year groups concentrated on as part of the project.

Year 6: Pupils were constantly drawn to the images of the white horses and discussions were held about how the role of animals changed within the increasingly industrial workplace.

Children designed and modelled miniature 3D horse heads using a variety of materials and then used maps to create skin segments to represent the migration of people to America at the time of George bellows’ painting. 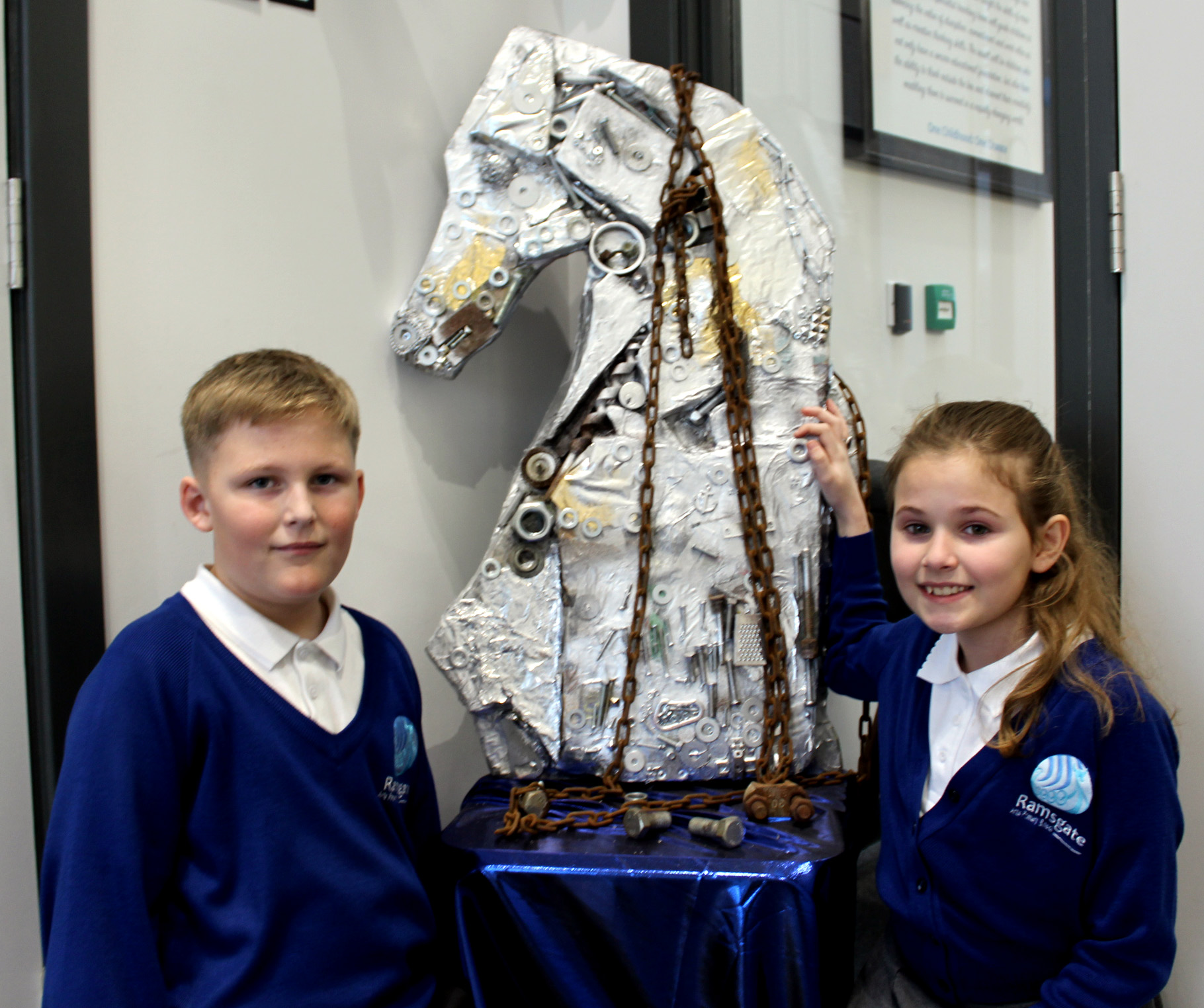 Year 6 pupils also decided to create a sculpture to show the link between the beauty of the horses and the severe, mechanical nature of the dockyards. They modelled a large horse head from polystyrene, covered it with papier-mâché, and then a metallic coating adorned it with reclaimed mechanical parts such as nuts and bolts, and a large chain.

Year 5: Pupils investigated the use of colour in the painting, exploring how it highlighted pollution, the weather, buildings, sea and snow. Some pupils used acrylic paints with broad brushstrokes to create a background.

Then they discussed what sounds might be heard in the painting such as seagulls screeching, foghorns blaring, horses neighing and men laughing and calling to each other.

Pupils then recorded their own vocal soundscapes and used a digital computer programme to see the soundwaves which they copied and painted onto the backgrounds made earlier.

They even used a marker buoy as an addition to their inventive seascape display in their exhibition. 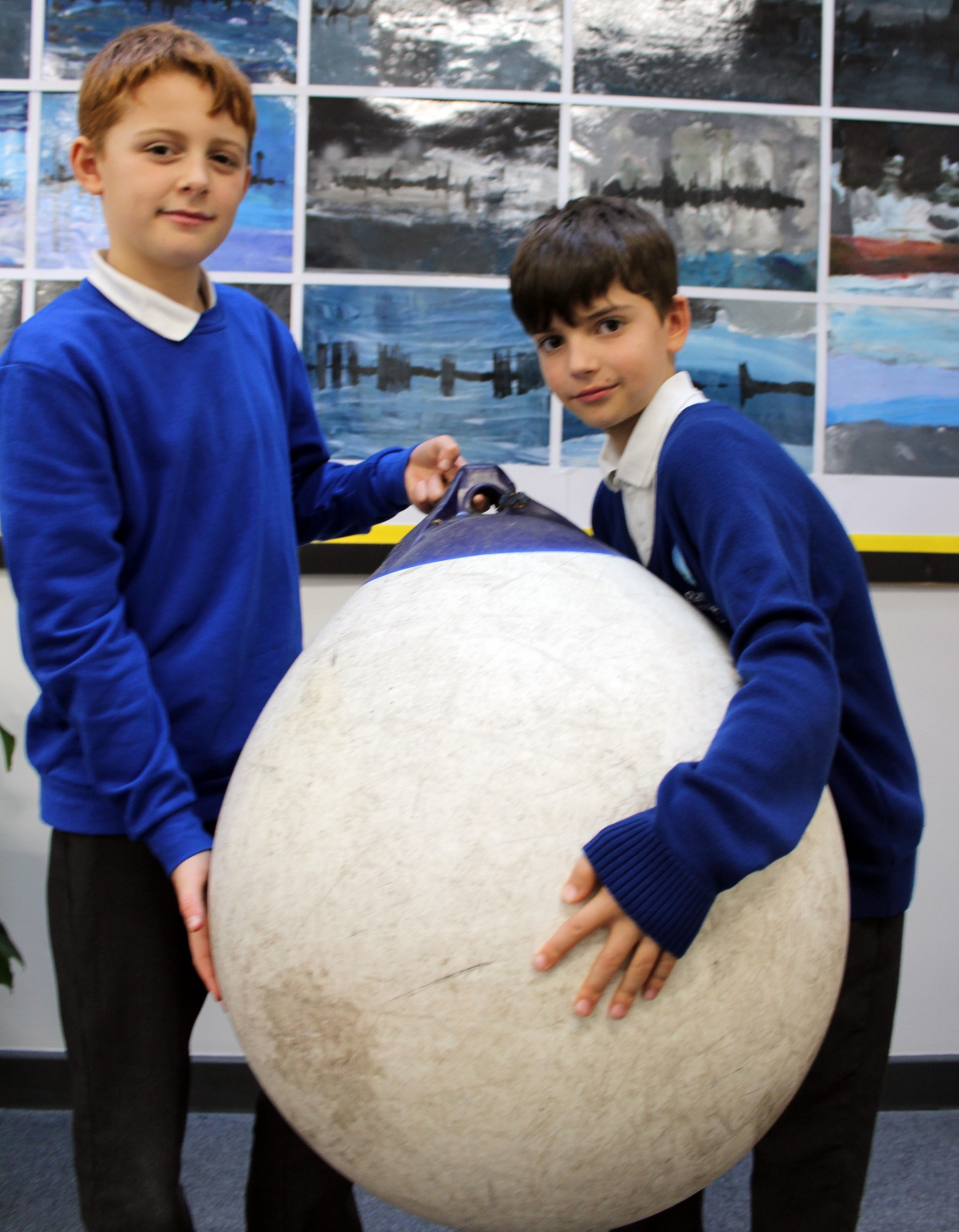 Year 4: Responded to the painting through art, poetry, science and team work. 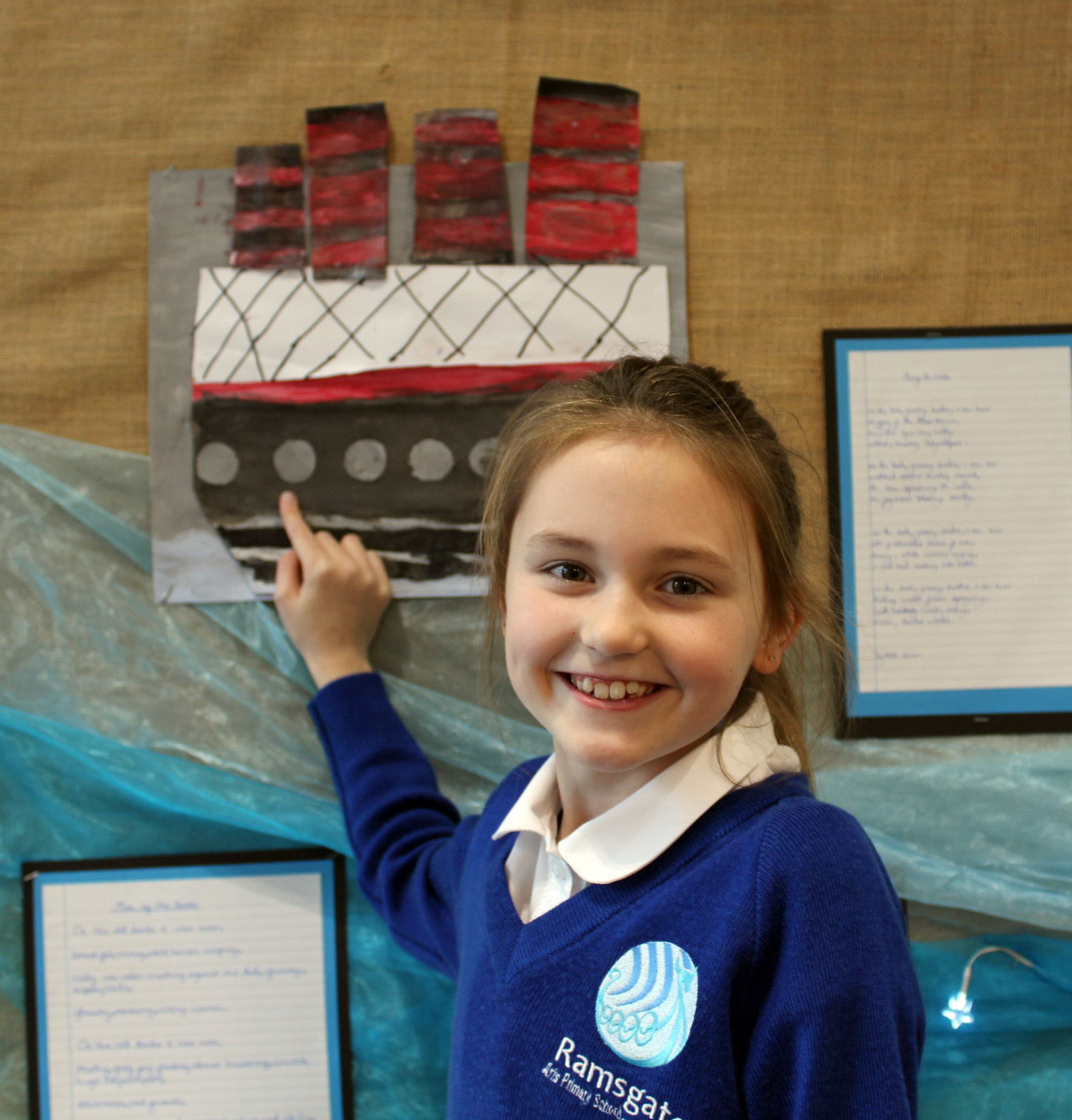 Linking to their topic work Incredible Earth, pupils experimented by dissolving Borax in water to create a saturated solution which when cooled created beautiful crystals.

Poems were written after pupils created a bank of words and phrases that they saw in Men of the Docks; and they worked as a team to create their own ships using different art styles.

Year 3: Pupils were fascinated by the thought that men turned up to the docks daily without knowing if there was work for them or not. 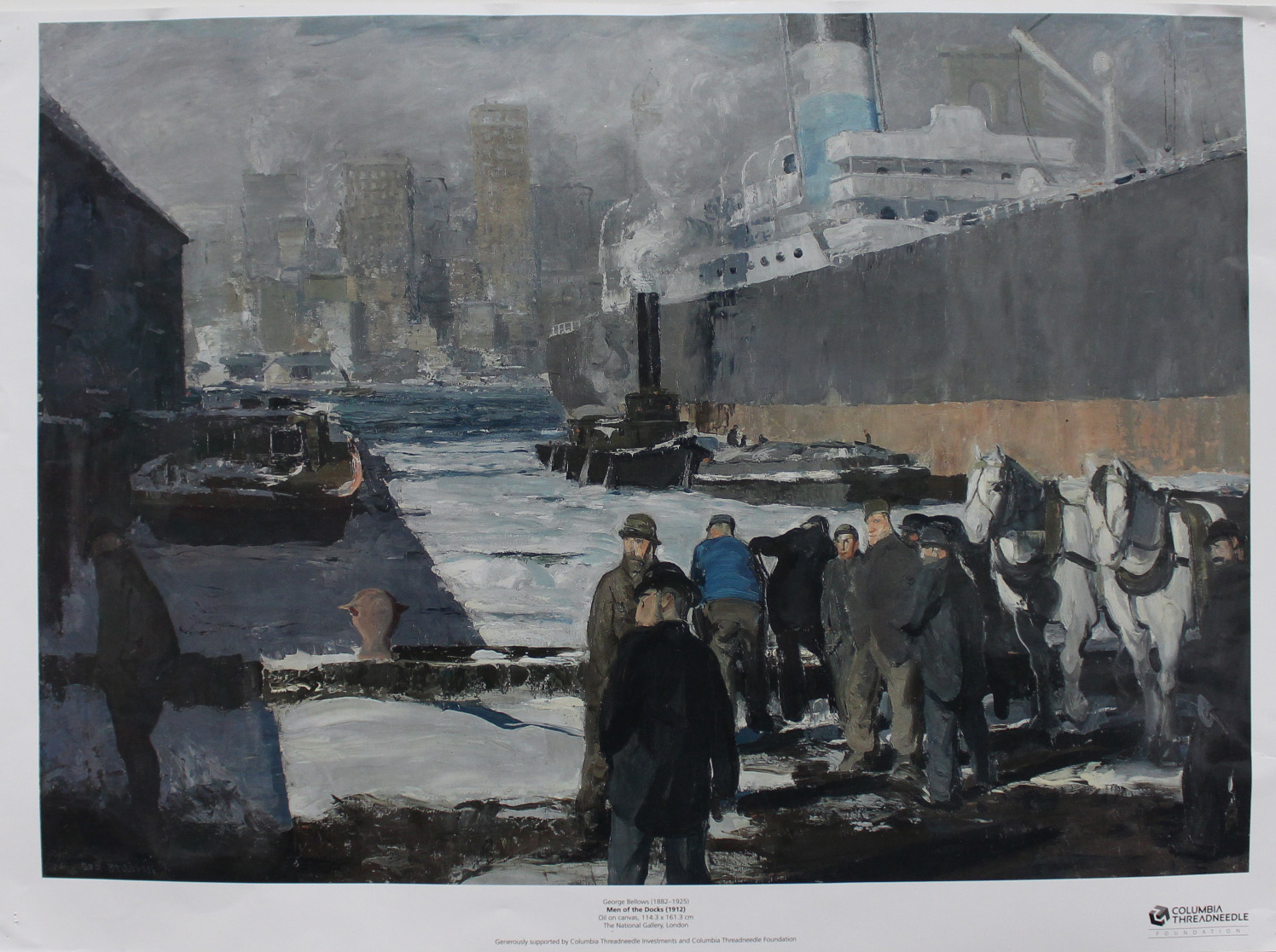 They also used photos from Ramsgate marina as a backdrop to their work, and finally they decided on using photography for their central collaborative work.

They created a darkroom and children replicated their poses from photos of themselves at the harbour, taking turns to ‘draw’ around each other using a torch to create light pictures.

Years 1 and 2: Pupils noticed the tall building in the background of the painting and investigated another George Bellows painting, City Dwellers from 1913,  that featured crowded tall tenement buildings of New York. 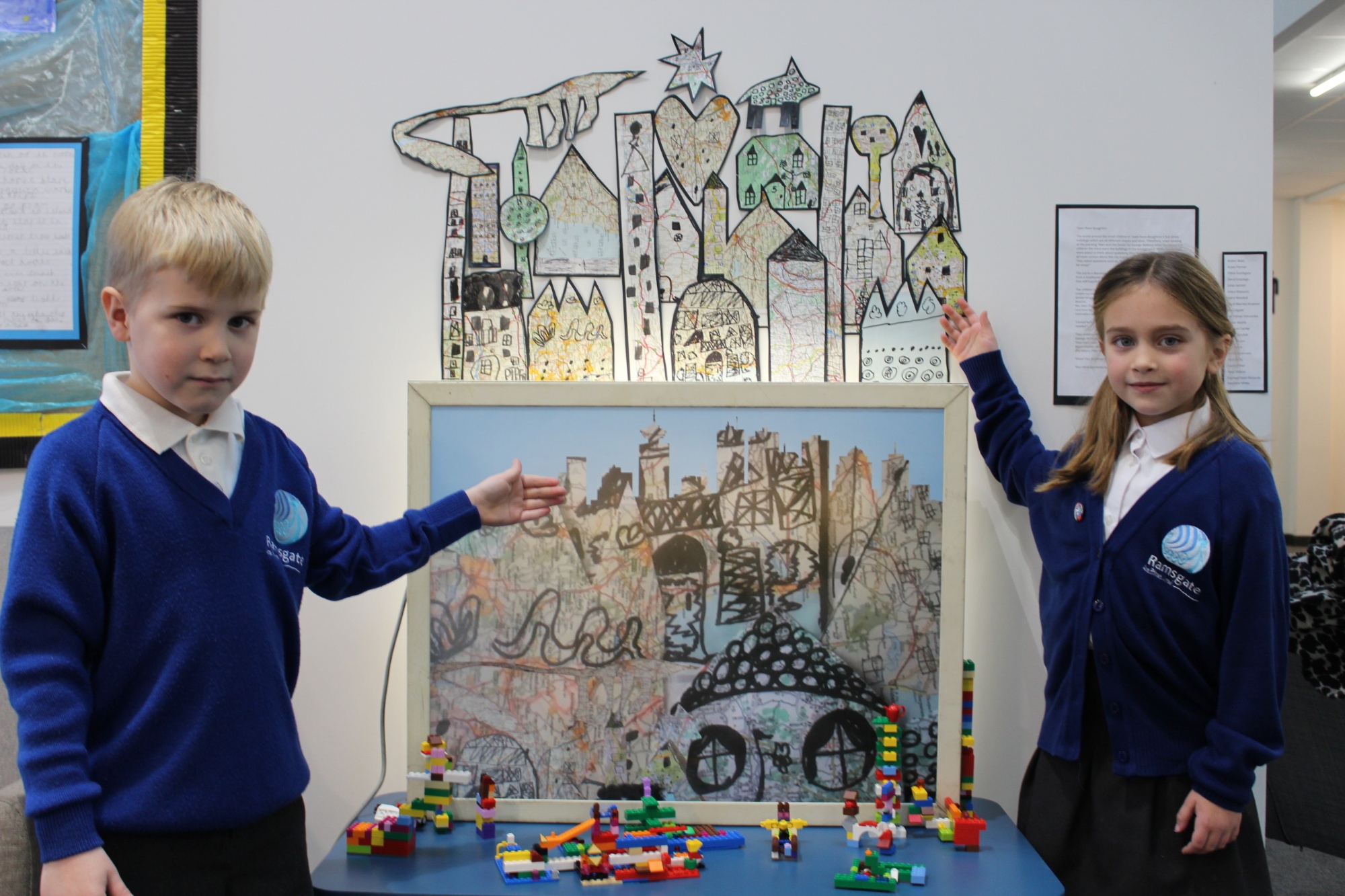 They created a junk art cityscape from recycled boxes and containers but gave the buildings, doors and windows a colourful vibrant finish to reflect the journeys from countries across Europe that immigrants made to get to New York.

Reception: Pupils listened to an audio track with their eyes closed and discussed what they could hear. This fired their imaginations to explore the George Bellows painting and discuss what noises might be heard in the picture.

They also thought about how the boat in the painting could take people to different destinations, and they finally decided to use modelling wire to create the outlines of different modes of transport.